×
Home » Health » Life Is Tough But So Are You : My Chiari Update

This post contains affiliate links. I only recommend products or services I use personally and believe would be a good fit for my readers. This comes as no added cost to you! Cents of Style did compensate me for this post by providing on complimentary t-shirt. 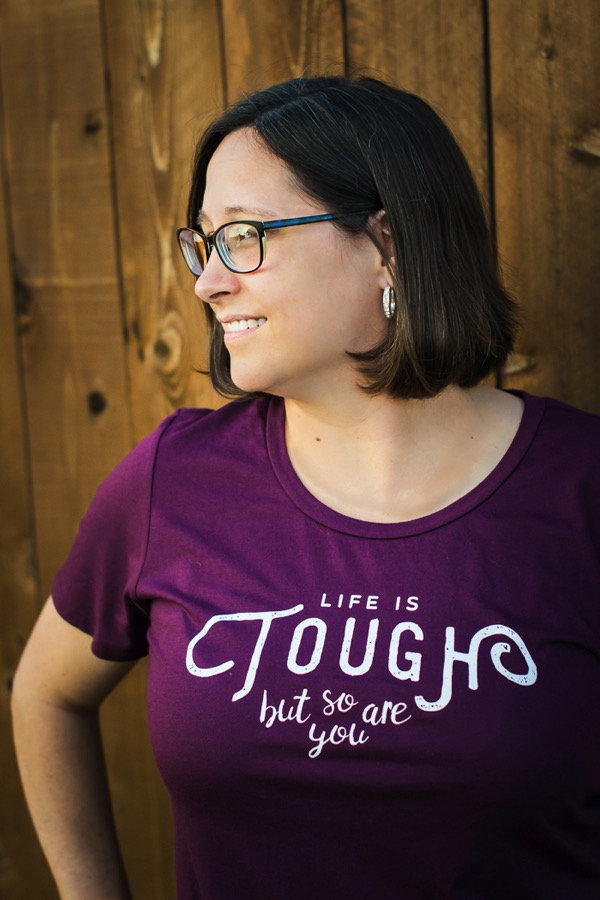 In January of 2015, fresh off New Year’s Eve, I made a resolution. 2015 was to be my “Year Of NO Fear”. I thought it was pretty clever. I was going to conquer the things that had held me back before. It started off with a bang that spring. I traveled to New York City and stayed in the city alone. I took a ride on one of the steepest railways in the world, amazed by Norway’s scenery and proud that the cliffs didn’t get the best of my nerves. I made it to the second floor of the Eiffel Tower (which wasn’t the top but was one more floor than the last time).

During the summer, I went down a super tall waterslide where the bottom drops out below you to send you down the chute. The very next day, I managed to shove my body into an MRI machine and only had to be pulled out once for a break. A few years back, I had totally freaked out during a MRI. The thought of going into that “tunnel of doom” made me sick to my stomach. In the end, I endured a few more MRI’s. In December, I finished the year out with my biggest challenge - brain surgery. 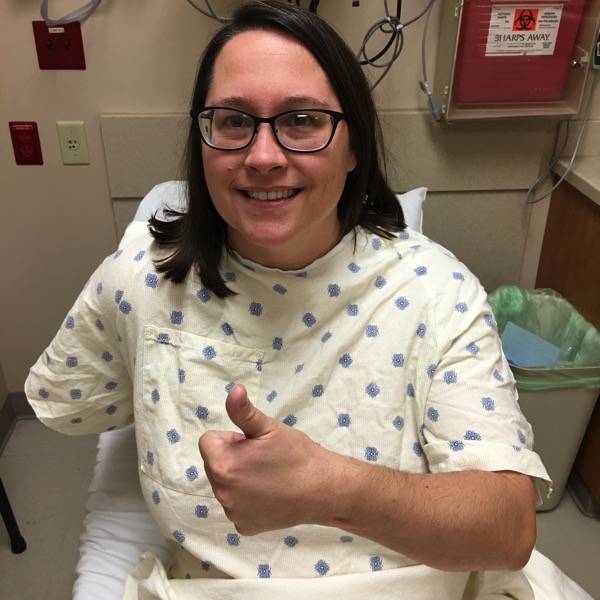 I tell my friends, the night before is worse than waking up in pain the next day. To say you have to psych yourself up is an understatement. There is something so terrifying about someone messing around with your brain. The what if’s consume your thoughts. I tried to focus on the recovery portion, because you can not dwell on what’s about to happen. If I thought looking over cliffs scared me, well that was nothing compared to brain surgery. 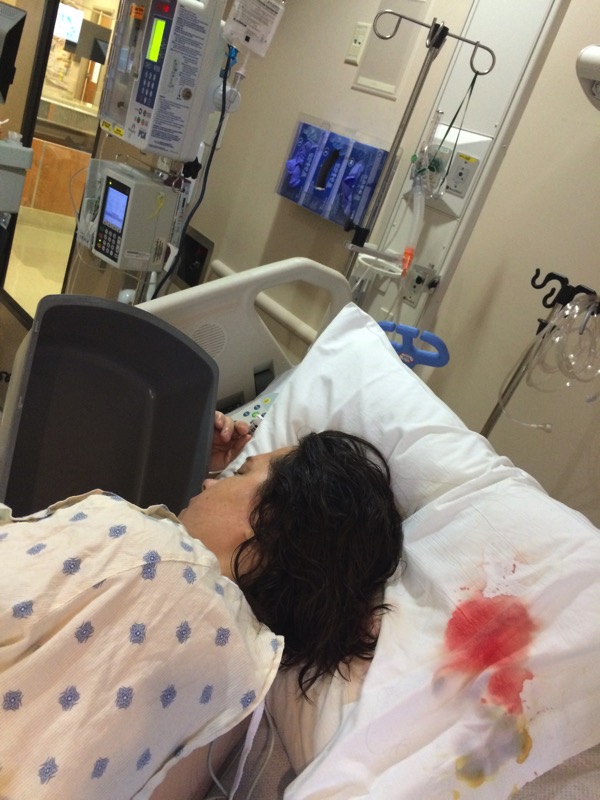 I won’t lie, the actual surgery hurt. But there was so much relief in knowing the actual surgery was behind me. I spent some time in ICU and on the Neuro floor. I don’t remember much, except for vomiting and hitting the pain button over and over. After 5 days, my husband drove me home where I then battled an allergic reaction. By my 2 week appointment I was doing really well again and I was on the road to recovery. I was still in pain, but thought I had put the hard part behind me. What I didn’t know was that the hard part was just beginning. At the 3 week mark my recovery went south. I knew something was wrong. This was towards the end of January.

By February I was miserable. My pain was worse than before surgery and I pretty much became couch bound. My life seemed to suddenly be put on hold. I couldn’t seem to get any answers from my medical team. I was referred back to my surgeon over and over again, but he was traveling for 7 weeks. In the spring, I finally had an appointment and was told that I was still just healing, they would run another MRI to rule other things out. A few weeks later, I was told that I should just see a headache specialist. Everything in me told me something was wrong, but yet trained professionals assured me that nothing was wrong. I began to doubt myself, and doubt my tolerance for pain. I felt incredibly guilty because I became so much of a burden on my family. My body seemed to just continually decline, and in May my primary doctor agreed something was wrong. When your own doctor tells you they are worried about you, alarm bells start to go off. I went through another MRI. But I’m glad I did. My doctor told me that something had in fact showed up, and advised me to get a second opinion.

In June, 6 months after my surgery, I saw a new neurosurgeon in Houston. He confirmed that I did in fact have issues, and it was no wonder I was feeling miserable. The solution involved another surgery. It’s very hard to describe how you feel when you hear “brain surgery” again. I didn’t want to have that nerve wracking experience again, but I didn’t want to feel miserable the entire rest of my life. The doubts and fear slowly crept back in. But I was also happy to feel like someone believed me, and there was relief in that. In another way, I looked forward to possibly getting better results and feeling somewhat normal again. I was “cautiously optimistic”.

The night before my second surgery, I shared this with some close friends. 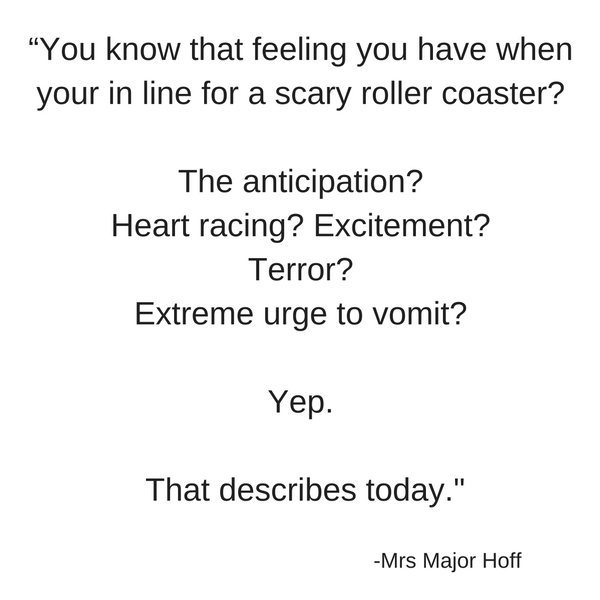 Then began the night of psyching myself up. I distracted myself by binge watching a tv show all night long. Who needs sleep when they are knocking you out in a few hours? The nerves were in high gear. Everything in me wanted to fight it. This time there was no Madonna playing in the operating room. The nurse putting the mask on my face was pushing hard and I remember wanting to ask her to be more gentle. And then just like the train ride in Norway, it was over just as soon as it felt like it began. 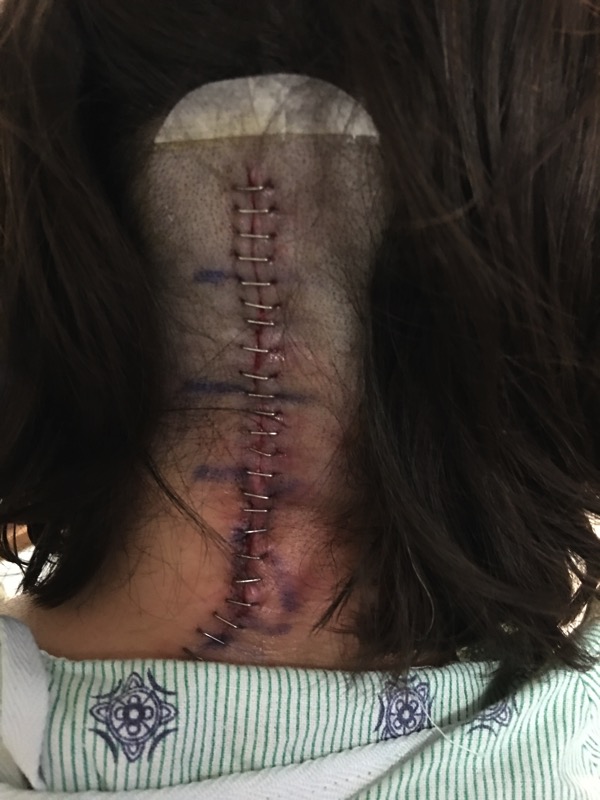 Twenty four hours later, in extreme amazement, exhaustion and a medicated state, I went home. I had set my expectations low. I had some set backs, another reaction to a medication, but by 2 weeks I was again feeling pretty good. At my next appointment it was deemed the surgery was a success. Eight weeks later, I can agree. I’m still cautiously optimistic. Slowly as the swelling goes down, so does the pain and stiffness. The headaches are becoming less frequent. I no longer depend on pills and coffee to get me through my day. Since chiari has no cure, I think I will always have the “what if’s” lurking in the back ground. I know that another brain surgery isn’t off the table. I know the days of feeling good can be fleeting. The one thing I do know, is that I’m tougher than I ever gave myself credit for. 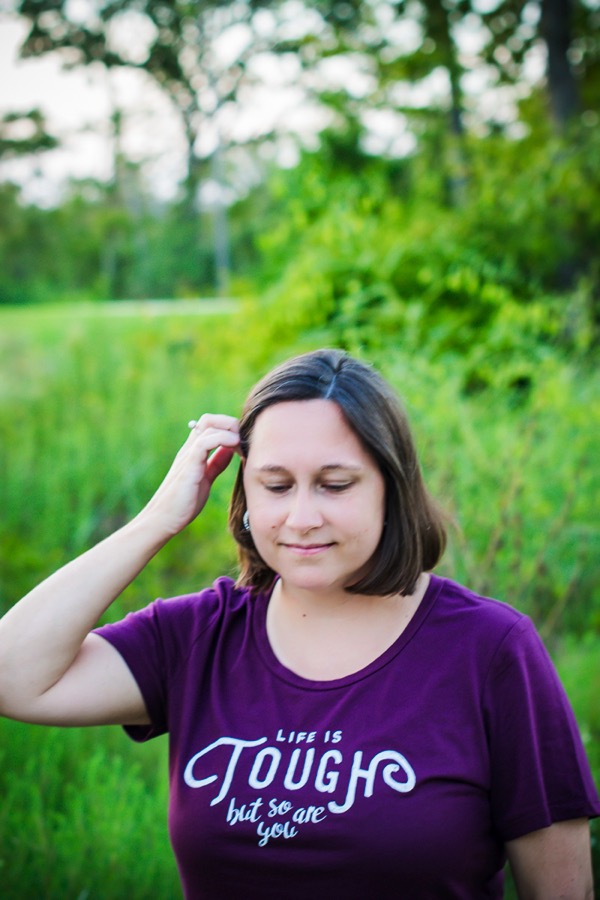 The other thing I know, is that EVERYONE has a story. Life is tough. It’s not a matter of if bad things happen to you, it’s really a matter of when. My story isn’t really that different from everyone else’s. Maybe the situation is, but the fear, anxiety, and feeling of things stacking up—that’s universal. 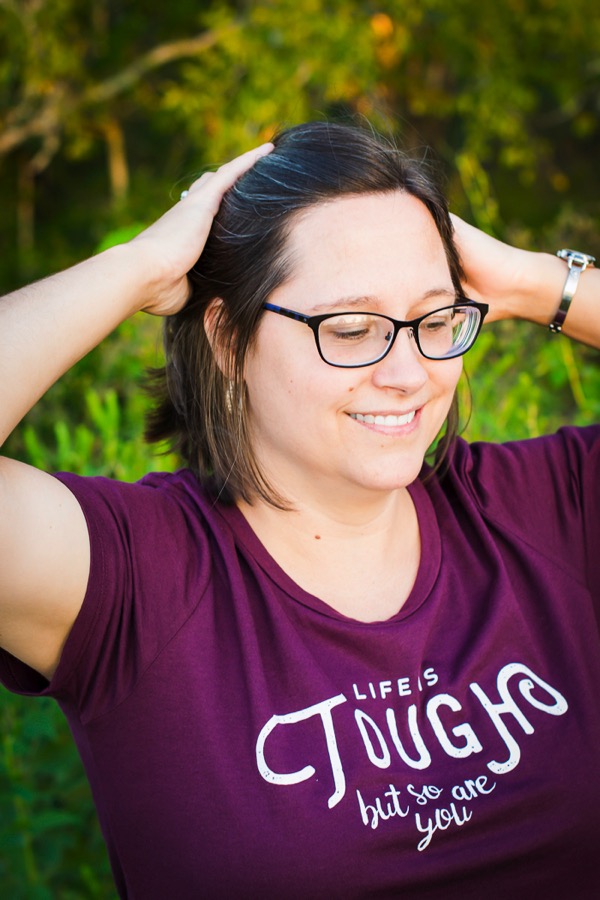 2015 has come and gone, and 2016 is close to an end as well. I think it’s time for my resolution to come full circle too. So in my last fear conquering task, I’m stepping about of my comfort zone once again. I’m sharing pictures of myself and my journey here on the world wide web. I’m sure to some it sounds silly, but for me, it was once more conquering something I felt insecure about. 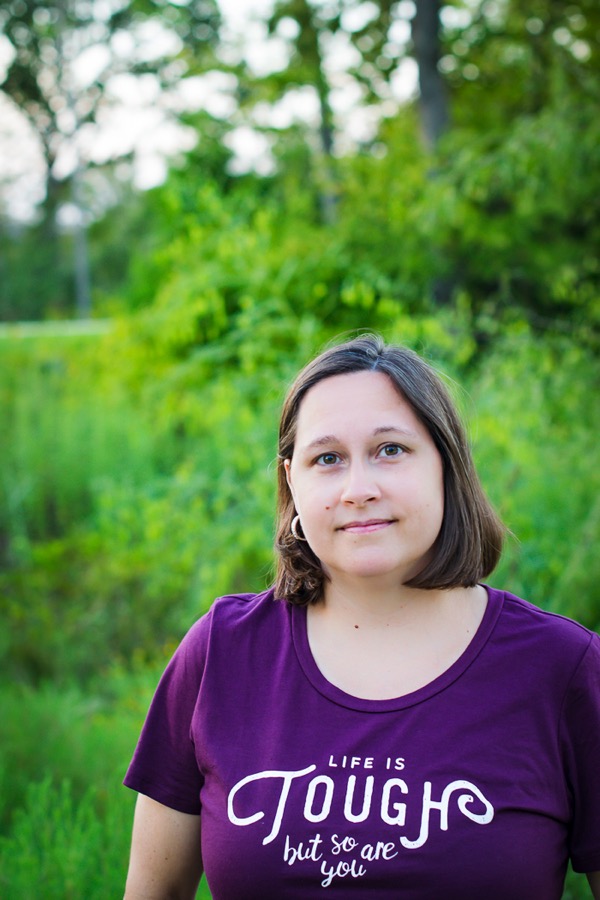 The new line of t-shirts from Cents of Style really spoke to me. The “LIFE IS” line is so on point for so many of us. I have been a fan of Cents of Style for years and love their sassy shirts. I get more compliments on my “Can’t Adult Today” t-shirt than any other piece I’ve ever owned. When I saw the choices for this line, I wanted them all. The one that really spoke to me was the “LIFE IS TOUGH, BUT SO ARE YOU”. If that didn’t sum up the last year, I don’t know what would.

The offerings for the “LIFE IS” line includes 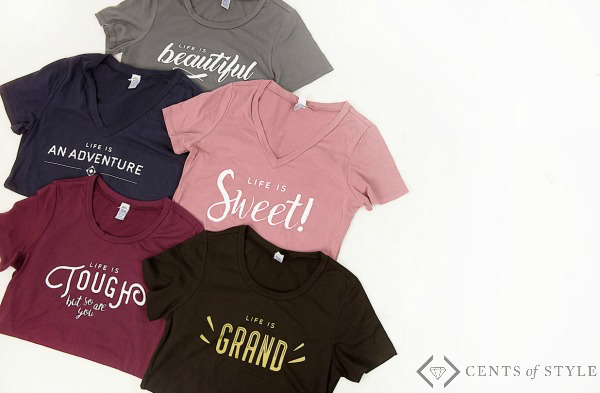 LIFE IS SWEET
LIFE IS BEAUTIFUL
LIFE IS GRAND
LIFE IS AN ADVENTURE
LIFE IS TOUGH, BUT SO ARE YOU
The best part is that the new LIFE IS Line is also Cents of Style’s Fashion Friday Pick. Which means you can grab these at a steal! From now until Sunday Sept 25th, score these t-shirts for ONLY $15.95. Not only that, but it comes with FREE SHIPPING! Simply click HERE and use the code LIFEIS1

Which one will you pick? What have you accomplished that totally terrified you? I am forever inspired by the stories other people share, so please, leave a comment and share yours!

***Special thank you for my husband for being brave enough to take photos for me. For all my friends and family who prayed tirelessly for our family and for God hearing those prayers. For the blogging community who supported me, for the readers who encouraged me - there are not enough words of gratitude I could give. 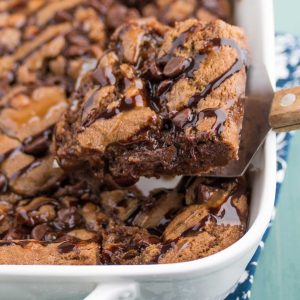 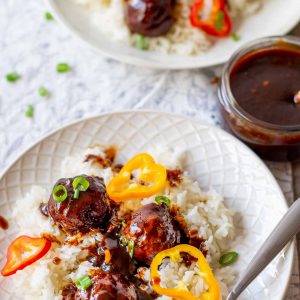 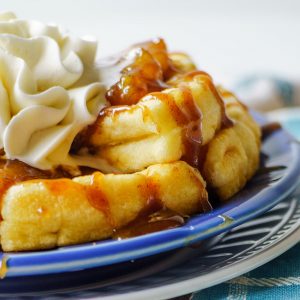